I just read that Jim Fregosi, longtime Angels shortstop and the first manager to bring the team to the playoffs, died this morning.
Long, long before Mike Trout, Jim was the original Angels wunderkind.  Acquired from the Red Sox in the first expansion draft in 1960, he made his major league debut as a September call-up in the Halo's first season, was a regular reserve in '62, and was a starter by '63.  He was the first Angels player to hit for the cycle, and along with Bobby Knoop was half of one of the greatest double-play combinations in league history.
Multiple-time All-Star, Gold Glove winner - Fregosi was the face of the franchise for the better part of a decade.  He remained a Halo until after the 1971 season, when the Mets sent four players to the Angels to acquire him.  He returned to the Angels in '78 as manager.  Oddly enough he ended up managing the one remaining player who was traded for him: Nolan Ryan.﻿ 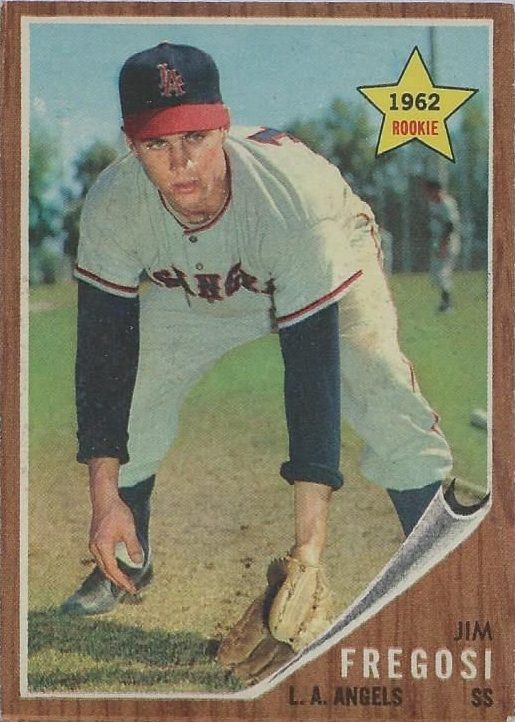 Rest in peace, sir.  You were an amazing player, and a great baseball mind.
Posted by lwk at 11:59 AM 1 comment:

I don't know if I feel old or young!

It's been a tough year so far around these parts so far - within the space of a couple months, my wife lost a pair of grandparents.  Ray and Maureen Williams were a true throwback pair - they never took crap from anyone, ever, but they had the biggest hearts of anyone I've ever seen.  Like most people who lived through the Great Depression, they acquired a good amount of stuff during their lives, and the family decided to try and unload some of it during our block's recent neighborhood garage sale.  So we found ourselves looking at a lot of Mah Woman's grandparents stuff for a bit.

With all the stuff we tried to unload, there was one thing I grabbed for myself: Jamie's Granddad had a little battery-powered AM/FM radio, and it had to be mine.  I'd been looking for a portable radio that actually got AM for a couple years now, so I could listen to the Angels games live.  (And if anyone reading this knows anyone at KLAA, PLEASE let them know that BSiD (Brain Sucking iPhone Device) users need a way to listen to Angels games live on the internet!)  So now I finally have a way to follow the games without hijacking the TV from my girls.

The second game I've listened to on this little marvel was tonight.  And what an amazing game it was - Ervin Santana just threw a one-hit shutout, facing only 29 batters against the Arizona Diamondbacks (and former Angel, and 2008 All-Star Game teammate, Joe Saunders).  El Meñeo has struggled for much of this season, so it was AMAZING to listen in as he pitched perhaps the best game of his career.

The odd thing is that in both of the games I've listened to on this radio, I've been playing the PC video game Diablo III while listening.  (What can I say - I work for Blizzard Entertainment, and Diablo II was my second-favorite PC game ever long before I got this job.)  As much as I remind myself of an old man when I listen to baseball games on the radio, I still feel like a kid when I'm playing video games, so to do both at the same time creates much confusion.

On a personal note, this game was so much fun to listen to that I actually called in to Angel Talk on AM 830 for the first time tonight.  Terry Smith, producer Darren Chan, and the phone screeners were kind enough to take my call, so I was able to share my thoughts on tonight's game - basically that I think it may have meant a little more than Ervin's no-hitter last season, because tonight he didn't actually give up a run.  (And yes, I realize that no-nos are a team effort, especially when the other team scores an unearned run.)  I was even given enough time to draw a comparison between Ervin and the great Nolan Ryan, who threw six 1-hitters while an Angel.

So congratulations to you, El Meñeo, and thanks to the folks at KLAA.  Let's earn another win tomorrow!
Posted by lwk at 11:23 PM 1 comment:

Holy cow it's been forever since I've posted to my blog.  Sorry 'bout that.  Since my last post I've gotten a new job and a new kid, so things have been really crazy for a while.  (And then there was the hard drive crash...)  But none of that matters, because...

I just hung the Angels flag outside, I've got the tickets printed, and the camera's battery is charged.  12 hours and counting!
Posted by lwk at 7:13 AM No comments:

The Angels have played host to the MLB All-Star Game three times before this year, but 2010 was the first time they've hosted since I moved back to Orange County.  There was no way on Earth that I was missing it.  I was fortunate to be able to attend all three days of the festivities.  (Thanks, anonymous people who sold your tickets on StubHub!)

It's been great seeing the All-Star Game logo all over everything this year, even if the star looks a little like the Rangers' logo. 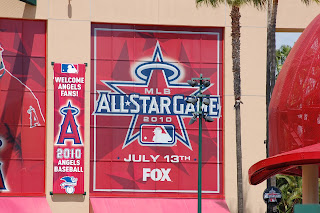 But seriously, what the heck is this? 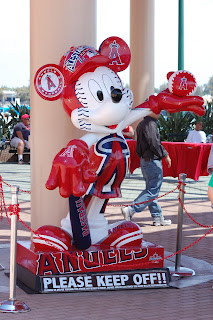 There were Mickey statues for every team and then some scattered around Orange County and Los Angeles.  They made the mistake of putting the Red Sox statue in OC, and it got vandalized.  While I in no way support or encourage acts of vandalism, I was stoked to hear that an Angels fan beat up Boston Mickey.
Dear Topps, cool poster, and thank you for fixing the spelling of Jered Weaver's name before you released his card this year. 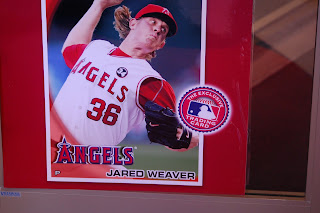 Speaking of the Red Sox, I saw Boston General Manager Theo Epstein as I was walking in.  Theo, that "SOX SUCK!" you heard before you got to your seat was me.  You're welcome. 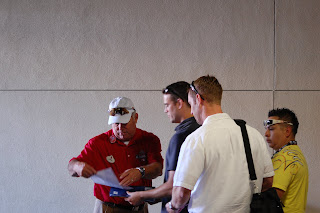 The weekend started off with the All-Star Futures game on Sunday. I was able to score a great seat for this, so with the wife's camera in tow, I settled in and enjoyed some baseball.   My seat was in the second row just past the home dugout.  There is nothing like watching a baseball game this close when you have a telephoto lens.  Here's the World team's third base coach, Hall of Famer Ryne Sandberg. 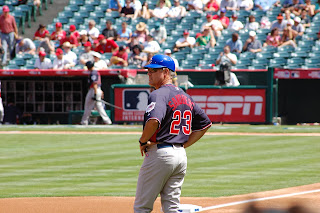 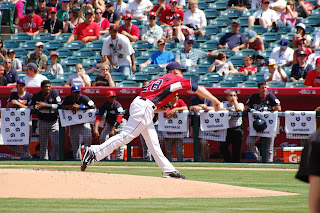 I don't know why it was a surprise to me, but the U.S.'s starting catcher was Huntington Beach High's own Hank Conger. 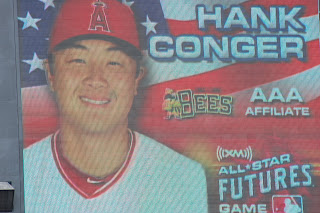 Here's Hank at the plate in the first inning. 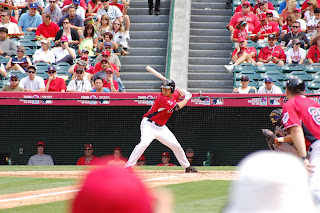 Another Angels prospect, Mike Trout, pinch ran in the first inning, and remained in the game to play center field.  This is my second favorite picture from this game.  Hopefully you'll be adding to that banner soon, Mike. 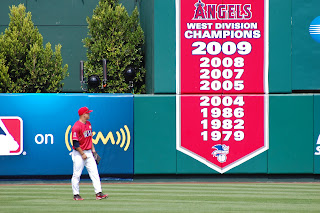 Here's Trout at the plate.  He ended up going 2-4, but reached base every time he went to the plate. 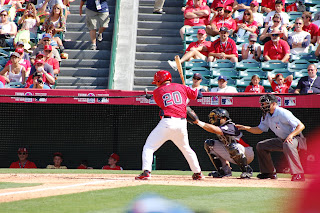 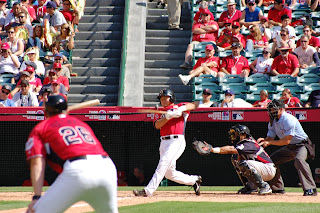 They always have a kid "steal third" during Angels games.  This time, the MLB mascots tried to block the kid, who took out the Red Sox mascot with a great left hook.  That's right, there is no love for Beantown in Anaheim. 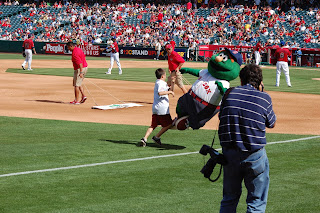 I get all tingly whenever I see this shot.  This is Hank Conger hitting his first-ever home run in the Big A. 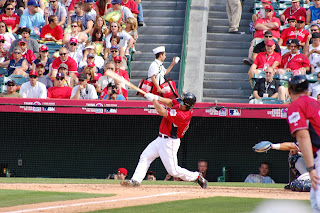 To his credit, the kid acted like he's been there before. 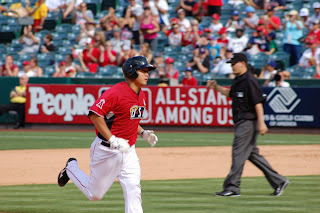 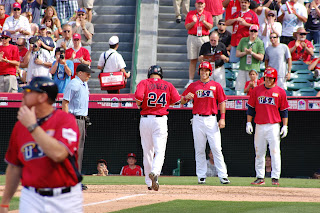 I just read an article where the guys waiting at the plate to give Hank props were referred to as a "Conger line."  I like it. 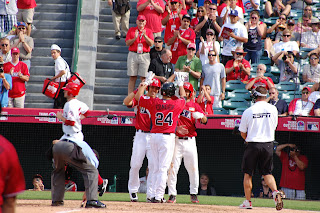 One unexpected bonus during the game was the food.  There was a contest where chefs from twelve of the MLB ballparks made their absolute best hot dogs, and saw which one would sell the most.  I didn't care who won.  I had to support the home team, so I got the Halo Dog.  It was the single best chili dog I have ever had in my entire life. 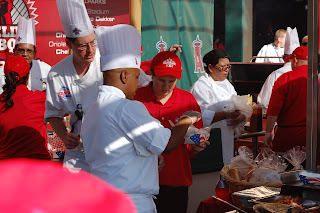 Angels farmhand Luis Jimenez came in late in the game to play third base for the World team. 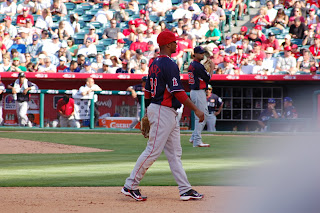 Another Orange County product, Austin "Romeo" Romine from El Toro High.  The people behind me went NUTS when this game came to bat.  So nuts that I had to turn around and ask the guy, "So, high school boyfriend?"  We had a pretty good laugh over that one.  Turns out the guy had gone to school with Romeo, who came over and posed for pics with them after the game. 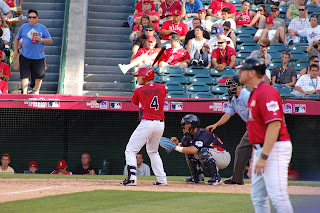 The U.S. won the game 9-1, and Hank Conger was named MVP.  It was the start of a great day for Angels fans.  Here's Hank being interviewed by Erin Andrews. 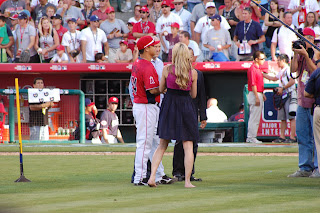 There will always be a soft spot in my heart for the 1982 Topps set.  When I was a kid, I came from school one day to find that my parents had bought me the entire set from an ad in a magazine.  Man, did I have a blast rooting through that set!  For the first year ever, I had every single card.  I still have this set, in the same shipping box, sitting in my garage.  Thanks, Mom and Dad!

While 1982 was a great year for my baseball card collection, it was an even better year for the Angels.  After a three year wait (and keeping with the "if it ends in a 2, it's a good year" theory), the Halos won their second American League West division title.

1972 was an interesting year for the Angels.  On December 10th of the previous year, the face of the franchise was traded to the Mets.  Jim Fregosi, who was like a son to Mr. Autry, was sent packing in a deal that (at the time) had Halo Nation in an uproar.

It turned out to be the best trade the Angels have ever made.

Why?  In addition to catcher Frank Estrada, pitcher Don Rose and outfielder Leroy Stanton, the Angels received a hard-throwing (but very wild) right-hander by the name of Nolan Ryan.

Very sad news today.  Rory Markas, the Angels' primary radio broadcaster since the magical year of 2002 passed away last night.  I didn't start listening to the Angels on the radio until 2002, so he's really the only lead broadcaster I've ever known for the team (and the Angels have had some greats).  I really appreciated the job he did, as he called a great game and his voice was always filled with excitement.  Although I was watching TV when we won the Series in '02, the win didn't seem real until I tuned in to the radio on the way home and heard the replay of Rory saying, "Just another Halo victory!"  I even have a bottle opener that plays his final call of the Series:

"Here's the pitch to Lofton...


THE ANAHEIM ANGELS... ARE THE CHAMPIONS OF BASEBALL!!!"

Rory, you will be missed. 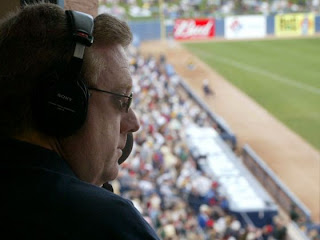 lwk
Angels Master Set is run by Lance Karutz, an Anaheim native and proud fan of the Angels. I'm currently putting together AngelsMasterSet.com, a website showcasing my collection of every Topps regular issue Angels baseball card ever made.

I know a lot of people who blog about cards end up trading for what they need. But seeing as how most of the cards I need are really rare, I figure the chances that anyone reading this has something I need are really slim. But if by some chance you have any of these and are willing to part with it for a decent price, or you know of someone or some store that has a card I need, please let me know.